This One Was A Bear

And a huge Macy’s as the backdrop.

Then centered in all of that a specially constructed 40 meter pool.

For two straight days people were jumping in and out, doing laps, taking pictures and gathering around.

Well, that is all but one. 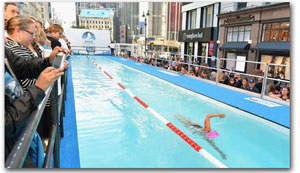 She even ate in the pool.

Every 90 minutes her team would bring her food to keep up her energy levels. Then she’d tread water to eat.
After it was all over she raised 100 thousand dollars for Superstorm Sandy victims and said…
“this one was a bear”

Hard to believe that was tougher than her last swim.

In early September Diana stumbled out of a calm ocean and onto a beach in Key West, FL.

She had just spent 53 hours swimming from Havana, Cuba to Florida. A trip that covered 112 miles.

As she emerged form the water Diana was barely recognizable. Her face was swollen like a balloon. Her lips and tongue were so badly blistered for a special jellyfish protective mask that she could barely speak.

Through her swollen lips she managed to mumble this…

That’s exactly what she did.

Now this is where the story really gets inspirational.

This wasn’t her first attempt to cross the wide open ocean.

Her journey started over 30 years ago.

Back in 1978. At 28 Diana set out to make history. She was to be the first person to make the trip without a cage to protect her from sharks.

But it wasn’t to be.

Her record attempt was a miserable failure.

The disappointment was so much that it took her until 2010 to give it another shot.

Unfortunately, that was another failed attempt. Not as upset this time around she set out to try again the next year.

With each failed attempt and passing year you’d think she would throw in the towel. Say the hell with it.

That’s what most would do.

Who would blame her. After all she’s in her 60’s. She’s not getting any younger and the swim isn’t getting any easier.

On her 5th attempt she said to herself.
“Find a way.”

Like a broken record. That phrase played over and over in her head.
It help block out negative thoughts and allowed her to finally overcome this personal challenge to achieve her life long dream…

At 64. Fighting swarms of deadly jellyfish. Diana became the first person in history to make the swim without using a protective shark cage.

That’s some powerful stuff right there.

Swimming 112 miles over the course of 53 hours.

Think about this for a second…

To think I thought my 30 hour non-stop drive from Atlanta to Halifax was tough.

Makes a 45 minute workout seem like a walk in the park.

Her success started with a belief in herself and a dream.

What’s are your dreams?

Are you chasing them?

Do you let defeat and setbacks derail you. Or do you relentlessly pursue them?

Instead of thinking of how far she had to go, she focused on the 6 inches of open water in front of her.

“Forget about the surface up. Get your hands in somehow, and with your left hand, say, push Cuba back, and push Florida towards you…”

Take action on your dreams.

Forge ahead no matter what.

P.S. A good team makes all the difference. No matter where you are, you can get involved with a great team and great workouts…